If you looked at the National Assessment of Educational Progress’ (NAEP) state performance map, you would see that Minnesota’s test scores rank among the top 5 states in the country. You might see this, smile, and conclude that you should be proud of our state’s school system and not think about it again other than to brag to your friends from out-of-state about how great we are. If you look deeper though, which fortunately NAEP does, you will find the data that shows non-Hispanic White, Asian, and Pacific Islander students are scoring significantly higher than the national average, while students from other racial groups are not; a phenomenon known as the achievement gap. The gap is widely studied for two reasons: closing it is extremely important, and, more simply, because we know about it (and can measure it). 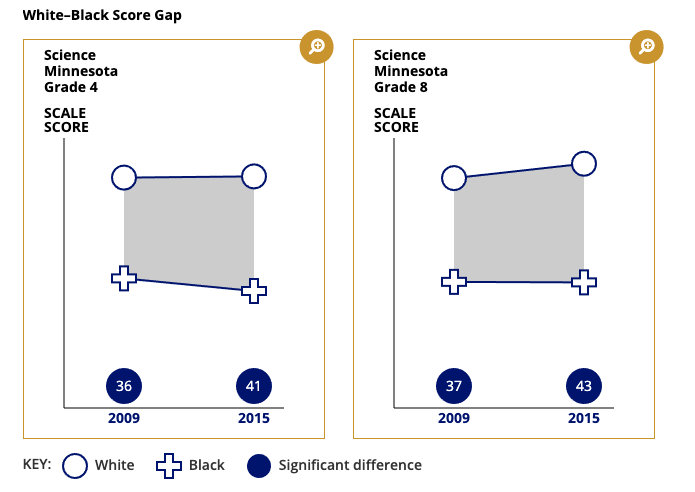 Information on the achievement gap came into existence because education scholars identified differences in test scores among different groups and were determined to understand why they were occurring. They looked at the data as a whole and then separated it by various factors (race, ethnicity, location, etc) to get a clearer picture.  This technique, called data disaggregation, is essential for accurately understanding disparities and determining strategies for ending them. In education, data disaggregation is extremely popular and several states, including Minnesota, have laws that mandate measuring and reporting disaggregated data. Unfortunately, the health and environmental health fields are far behind.

Take the first lines of the 2014 Advancing Health Equity in Minnesota report by the Minnesota Department of Health, “Minnesota ranks, on average, among the healthiest states in the nation. But the averages do not tell the whole story. Too many people in Minnesota are not as healthy as they could and should be, and the health disparities that exist are significant, persistent and cannot be explained by bio-genetic factors.”

It is no secret that Black, Indigenous, and People of Color (BIPOC) on average live in a more polluted, more dangerous world than White people in the United States. This is, of course, by design (see: structural racism). Hundreds of years of racist land use, transportation, development, manufacturing, and waste placement decisions have created a reality where communities of color are more likely to be located next to the worst polluters. This proximity to harmful environmental factors has led to disproportionately high rates of asthma, cancer, birth deformities, low birth weights, learning disabilities, behavioral changes, violence, and more in BIPOC communities all over the world. Ending these disparities and preventing future decisions from harming these communities is called Environmental Justice.

The Minnesota Pollution Control Agency (MPCA) defines Environmental Justice, a goal to which they claim to be committed, as “the fair treatment and meaningful involvement of all people regardless of race, color, national origin, or income with respect to the development, implementation, and enforcement of environmental laws, regulations, and policies.” Achieving this goal requires disaggregated health data because without it, how could you determine who was being treated unfairly? Or who was bearing an unjust burden of pollution and disease? A lack of knowledge can always be used as an excuse for lack of action. Using the disaggregated education data to inform strategy is required by law in Minnesota, but no such requirement exists for health or environmental regulations.

Health departments and other public agencies work to promote the public health in many ways every single day. How they do that, and which issues they focus on, is often contentious because the available resources and capacity are limited. Unless the data they are looking at when deploying these resources shows how health outcomes are different depending on race, income or location, they will not be able to respond effectively.

This article is the first of two parts, released as part of an environmental justice social media week of action. Part two, which looks at how the use of disaggregated data improves public health outcomes will be published on Wednesday, February 2.

Alexander Ian Passe is an Environmental Epidemiology Master of Public Health student at the University of Minnesota. They served as a Climate Resilience and Environmental Justice intern at MCEA and currently serve as a Public Health consultant for MCEA.