In this edition of MCEA's Environmental Monitor:

-Big news on the Next Generation Climate Act

-You helped send a clear message to the MPCA; a note from MCEA’s JT Haines

-Online workshop: stand up with the East Phillips neighborhood

Climate change is already impacting Minnesota. Minnesotans are experiencing more frequent intense rainfalls and flooding, allergy seasons are getting longer, and our winters are getting warmer. Iconic Minnesota wildlife like moose and loons are disappearing as their habitat moves further north.

Minnesota lawmakers have long recognized the threat that climate change poses to our state. In 2007, Minnesota lawmakers voted nearly unanimously to adopt nation-leading standards to reduce greenhouse gas emissions economy wide. At the time, those standards were based on the best and most current science. Now, science is telling us we need to move faster. We know that in order to avoid the worst impacts of climate change, we need to reduce emissions to net zero by 2050.

It’s time to update our greenhouse gas reduction goals to be consistent with the best available science. The Next Generation Climate Act would strengthen Minnesota’s emissions targets, and require our government agencies to take actions consistent with these standards and to protect overburdened communities.

This bill is moving forward. On February 16, the Minnesota House Climate and Energy Committee held an informational hearing to discuss the bill. Scientists, health care providers, legislators and environmental advocates spoke up in support of holding the government accountable to increased greenhouse gas targets. Representative Patty Acomb, the bill’s author, said that “Young people today look to those of us in leadership positions because we literally have their future in our hands. The time to act is now.”

On February 22, the Next Generation Climate Act was “jacketed” and formally introduced in the Minnesota House of Representatives as House File 1428. Next, the bill will be referred to the Climate and Energy committee, where legislators will vote on whether or not to move it forward.

Yesterday, the Minnesota Supreme Court sent the PolyMet air pollution back to the Court of Appeals to determine whether PolyMet knowingly submitted false or misleading information to the Minnesota Pollution Control Agency. The court’s ruling was a mixed bag, but the core argument in the case — whether PolyMet has used deception to dodge air pollution standards — remains in front of Minnesota’s courts.

Listen to a recording of our webinar to learn all about the Wednesday decision from the Supreme Court, what comes next in this case, and the other PolyMet legal battles on the horizon and awaiting decisions.

This webinar is free and open to the public, but please consider making a donation to help support our continued legal work to protect Minnesota from reckless copper sulfide mining proposals like PolyMet.

Thank you to the nearly 400 people who, in the course of a single week, joined the MCEA comment opposing the MPCA's ill-conceived proposal to weaken water quality standards in Minnesota.

A note from MCEA’s Northern Minnesota Advocate:
“It's clearer and clearer every day — we need to be doing more to protect our precious clean water, not less. THANK YOU for helping us communicate to the judge and the agency just how important this issue is to our state and people.” -JT Haines

Youth climate activists are part of a broad network of people fighting Line 3. We were excited to see Brent Murcia, a student within the MCEA facilitated University of Minnesota Environmental Law Clinic, highlighted in a recent Star Tribune article. MCEA is proud to work with Brent and the Youth Climate Intervenors in their work fighting for clean water and climate justice. 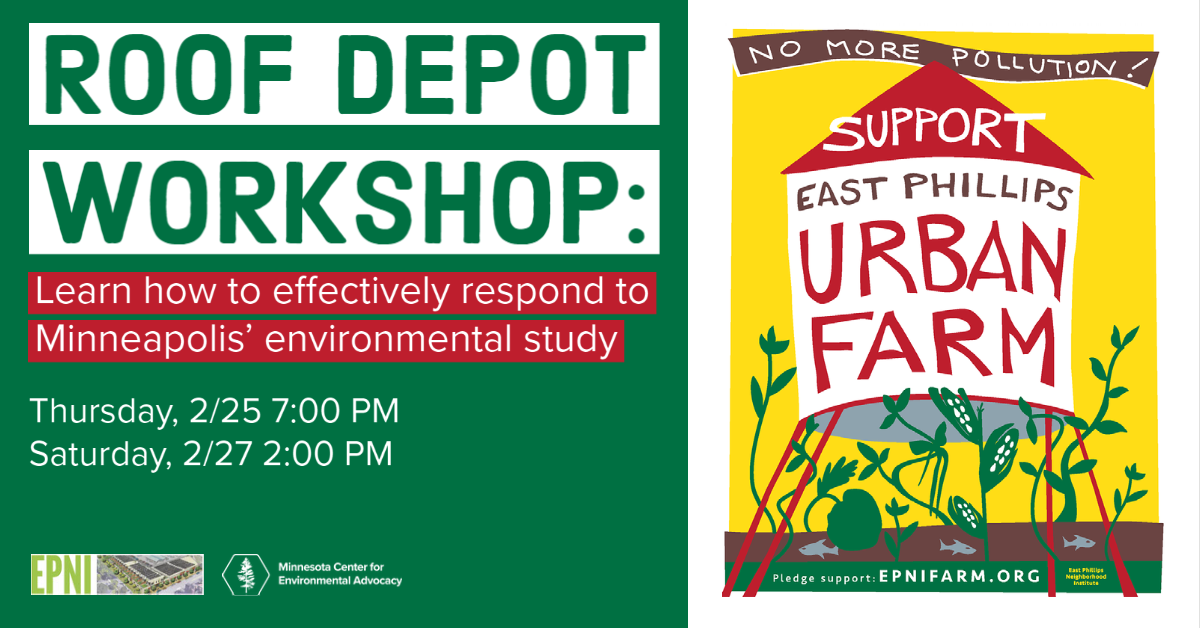 Stand up with the East Phillips neighborhood

The City of Minneapolis is proposing to consolidate Public Works operations at the Roof Depot site in the East Phillips neighborhood. But, community members want the City to consider proposals that would pollute less, and do more for the community. Stand up with East Phillips community members, who for decades have been unequally saddled with the pollution of Minnesota’s largest city.
How you can get involved: we have partnered with the East Phillips Neighborhood Institute to host a couple workshops this week (first one is tonight) and/or you can take a quick and easy online action to tell the City to extend the public comment period so the community has time to raise their concerns.

WHO: MCEA and the East Phillips Neighborhood Institute
WHAT: A free online meeting to help community members understand the City of Minneapolis Environmental Assessment Worksheet (EAW) for their proposed development of the Roof Depot site
WHY: Get the tools and knowledge that will help you to push the City to do better and consider better alternatives!
WHEN: Two meetings - Thursday, Feb. 25 at 7PM and Saturday, Feb. 27 at 2PM
HOW: Meet with us on Zoom - click the link above to register.

Materials for the meeting will be available in English, Spanish and Somali. If you need translation assistance, please contact us and we will do our best to arrange it.

TAKE ACTION:
The City has given community members and experts only 30 days to review its 1,067 page environmental study. Complete this short online action to tell the City to extend the public comment period.