Here We Go Again: Why the Piney Point Situation in Florida Also Matters in Minnesota

Another tailings dam is failing, this time in Florida. The shuttered Piney Point gypsum facility in the Tampa Bay area is leaking, causing the governor to order an evacuation of 316 homes and declare a state of emergency over the weekend. Faced with an all-out failure and a “20 foot wall of water,” crews spent recent days dumping millions of gallons of polluted water from Piney Point into local waterways to relieve pressure on the dam¹. Not only is this failure threatening homes in nearby communities, it is also threatening nearby drinking water. TV news reported plans “to provide those families with what they need, things like bottled water,” and warned viewers that “a large area should keep an eye out for a boil water notice if things get worse.” ² ³

Why does this matter in Minnesota? It matters because what PolyMet has proposed in Minnesota is all too similar to Piney Point in two extremely important ways.

First, Piney Point is a mining operation that was allowed to store wet tailings indefinitely. The current owner stopped cleanup efforts in 2011, filed for bankruptcy, and has done nothing since.⁴ As a result, communities downstream of Piney Point have been at risk, and we see the results of that now.

Unfortunately, DNR proposes to allow PolyMet to do this exact same thing, which it terms “wet closure.” MCEA lawyers have argued that wet closure violates Minnesota law, which the Minnesota Supreme Court is considering now. And while the DNR has required PolyMet to set aside funds for planned maintenance, these funds would not cover the costs of a catastrophic failure such as is unfolding in Florida.

Second, the dam at Piney Point is an “upstream” dam. Upstream dams fail more often than other dams because they are constructed using the slurried tailings produced during the mining process as foundation material for the next segment of dam. This reuse of tailings makes the entire dam more vulnerable to leaks and catastrophic “liquefaction” events. If this sounds familiar, it should. It is the same design that failed at Brumadinho in Brazil and elsewhere, and it’s the same design that has been banned in Brazil, Chile, Ecuador, and Peru.

Unfortunately, an upstream dam design is also exactly what DNR proposes to allow PolyMet to use in Minnesota. In fact, the dam that PolyMet proposes would be nearly three times taller than Piney Point, and would bear the additional disadvantage of being built on top of an old tailings facility dam. Experts on mining engineering have made clear that retrofitting existing storage facilities to hold more tailings, rather than designing new facilities specifically engineered to handle the higher volumes, results in a structure more likely to fail.

In other words, what is happening at Piney Point is what we should expect if PolyMet is ever allowed to be built in Minnesota. If a PolyMet tailings basin and upstream dam is built, left to sit, and eventually starts to leak, Minnesota will be faced with the same bad-or-worse choice that the Florida authorities have faced this week: dump polluted waters into the headwaters of the St. Louis River and Lake Superior watershed, or risk an even greater catastrophe.

Too many facilities similar to PolyMet have failed since PolyMet first submitted its proposal. As a famous Minnesotan once sang, how many years can we turn our heads and pretend we just don’t see? It’s time for Minnesota to finally do the right thing and put a stop to the PolyMet wet closure and upstream dam plan. 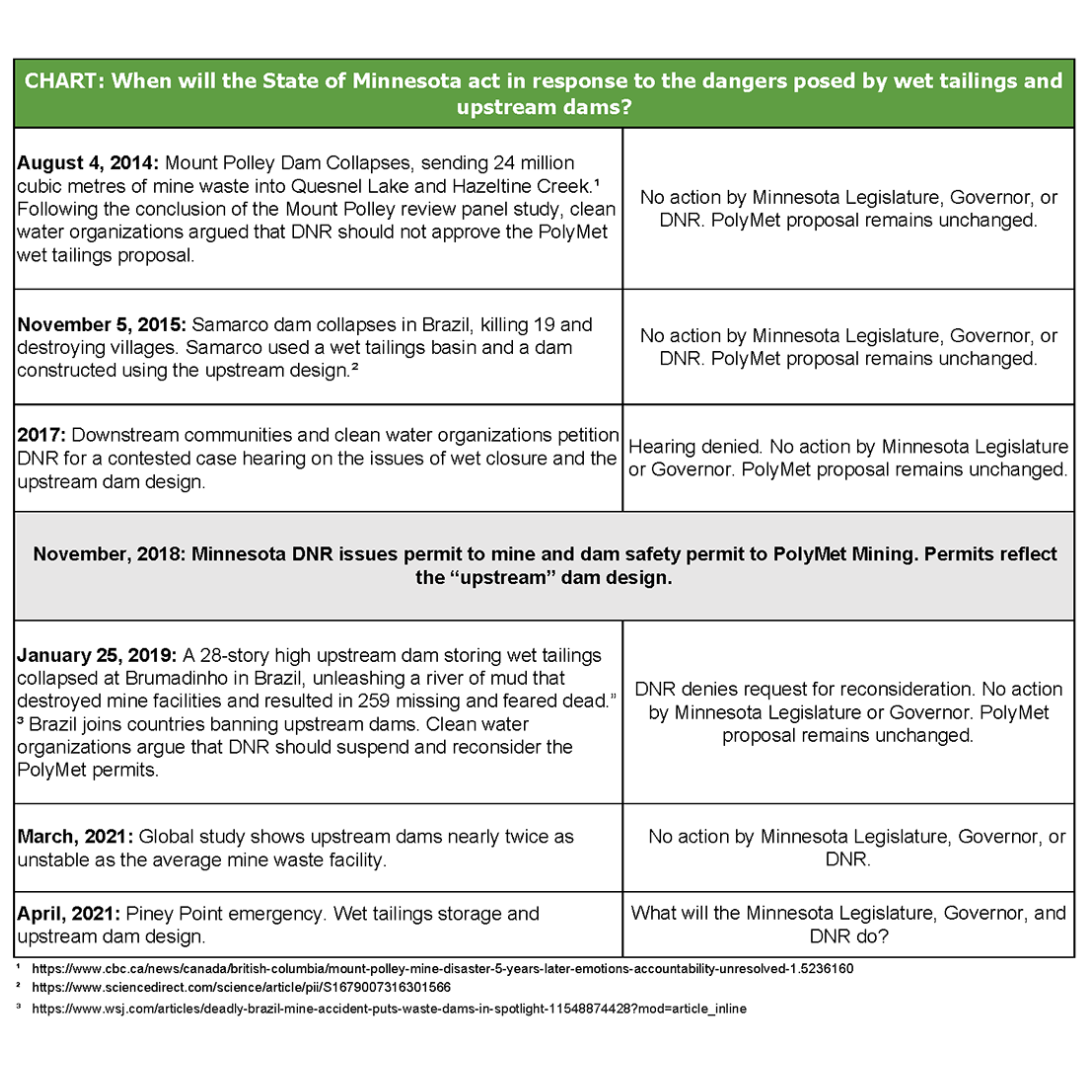