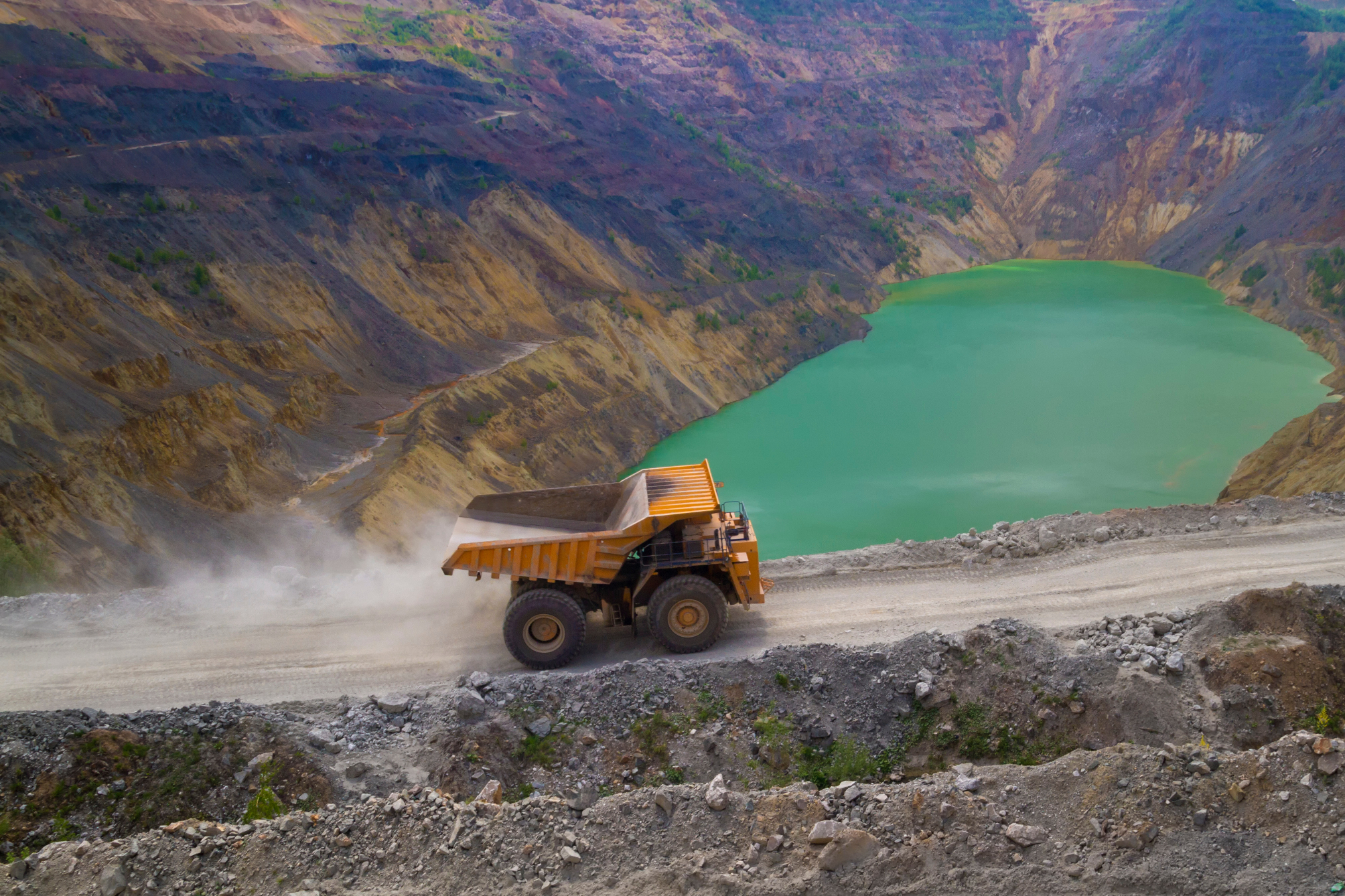 This article is part of a series called Mining the Climate Crisis. Read more here.

As decarbonization goes mainstream, mining companies are hopping on the bandwagon and increasingly branding their products as critical for the clean energy economy. While demand for these so-called “critical minerals” is projected to increase, serious questions remain about the need for new raw materials and mining’s role in the clean energy transition. Despite the unknowns, it’s clear that we cannot simply mine our way out of the complex and multi-faceted problem of climate change.

When companies exaggerate their environmental commitments to appeal to consumers’ concerns for the Earth, it’s called greenwashing. Greenwashing is a well-documented marketing tool used by virtually all industries where there’s money to be made from eco-conscious consumers, from fossil fuels to fast fashion, with incarnations ranging from sophisticated to ridiculous.

The deceptive tactic is aimed at convincing the public that a company’s products or services are “eco-friendly” by advertising superficial improvements and making shallow promises that require little to no actual substantive change in the way the company does business. For example, catchy slogans and public commitments to ramp up renewable energy can give the impression that giant oil and gas companies are taking climate change seriously, even as they continue to open up new oil and gas fields. The deception by the fossil fuel industry is so egregious that it has spurred lawsuits that have successfully forced greenwashed marketing campaigns off the air.

The mining industry is one among many trying to capitalize on the worsening climate crisis. It’s using greenwashing tactics in an effort to grease the wheels on controversial proposals by branding itself as a climate leader.

The $70B multinational conglomerate Glencore, owner of the proposed sulfide mine PolyMet upstream of Lake Superior, is a prime example. The buzzwords splashed across its website sound good – ethics, clean water, safety – but recent headlines tell the real story:

It’s critical that policymakers and the public recognize these misleading tactics for what they are so we can separate fact from fiction, and spend our limited time and resources advocating for climate solutions that actually work for people and the climate. To that end, let’s dive into how the mining industry is exploiting climate change to greenwash risky and destructive sulfide mining proposals in Minnesota.

When it comes to corporate responsibility, actions should speak louder than words. But not just any action – rather, strong safeguards for human rights and the environment must be integrated throughout a company’s entire chain of operations. Mining is one of the top polluting industries in the U.S, and achieving true social and environmental responsibility would require transformative change and significant financial investment. Rather than taking on the difficult and expensive task of cleaning up their act, mining companies typically opt for an easier route – launching one-off initiatives to inflate their eco-credentials.

For example, consider Twin Metals’ promise to use electric mining equipment. Electrifying the fleet is great, and consistent with other climate-related goals, but we’ve seen non-binding commitments like this before. Even if the company were to follow through on this particular promise, the project would still be a net source of greenhouse gas emissions, and this move would do nothing to address the most fundamental problem with the proposal: the damage to clean water.

When faced with the threat of permanent toxic pollution from sulfide mining, pretty pictures and one-off initiatives do little to nothing to resolve the very real concerns of clean water advocates and downstream communities.

WHEN THE GREEN TALK IS CHEAP

Along with marketing gimmicks, we also see the mining industry parade “eco-friendly” talking points in an attempt to convince the public that it has a vital role to play in addressing the climate crisis. Let’s examine them one by one:

Perhaps the most ubiquitous talking point is that the United States, and Minnesota, must mine for the metals we need to transition to a clean energy economy. We explored this faulty premise in detail in earlier blogs, but in a nutshell, here’s why it doesn’t hold water:

New mining is often at direct odds with the actions we need to take to address climate change. For example, in Minnesota, sulfide mining proposals would destroy wetlands, even though protecting wetlands is one of the most effective climate strategies in our toolbox. Arguments that suggest we need to choose mining for clean energy metals at their expense are disingenuous, dangerous, and divisive.

And, the metals we need for the clean energy transition are already above ground, but they're being sent to landfills and to other countries for recycling because of insufficient metal recycling infrastructure in the United States. If we bolster domestic recycling efforts, the so-called need for new metals drops. Additionally, justifications for new mining based on future demand don’t account for the steps we could take today to reduce reliance on mined materials, including passing long overdue comprehensive metal recovery policies and investing in less resource-intensive clean energy solutions.

Lastly, there is no evidence that mining companies actually intend to use newly-mined metals for renewable energy. In fact, no company proposing a sulfide mine in Minnesota has a legally binding contract to sell its products to a domestic clean energy supplier. When pressed, mining companies will admit that they would likely ship ore concentrates out of the United States to be smelted elsewhere.

Another common claim in the sulfide mining discussion is that Minnesota has the best mining regulations in the world, so it’s safest, and therefore most responsible, to do it here. MCEA attorney Ann Cohen puts that idea to rest in her op-ed, Let’s be honest about Minnesota’s mining standards, published in the Duluth News Tribune. Here’s the gist: it’s not true.

Cohen points out that “not only are Minnesota’s mining regulations less protective than Maine or Montana, they aren’t even as protective as Chile and Costa Rica.” Countries like Costa Rica, El Salvador, and the Philippines have banned open-pit mining due to the inevitable water pollution and high costs that follow when acid-generative reactive ores are exposed to open air. Nonetheless, Minnesota allows open-pit mines, and state agencies have granted now-suspended permits for open-pit mining to PolyMet.

For this talking point about Minnesota’s exceptionalism to qualify as more than greenwashing, our mining regulations would need to be significantly more transparent, safe, and protective of the public interest. MCEA has nine actionable ideas on how to make it happen. Until these changes take place, the mining industry’s claims about Minnesota’s world-class mining standards are baseless.

The “better in our backyard” talking point:

A particularly problematic industry talking point is an appeal to environmental justice. It goes like this: In other countries, mining is a dangerous and dirty business, so we have an obligation to do it ethically and responsibly here. Mining proponents often point to examples like child labor in the cobalt mines of the Democratic Republic of Congo to drive the point home.

Here’s the part they don’t tell you: the corporations perpetrating human rights violations abroad are the very same ones proposing sulfide mines in Minnesota. Offering these same bad actors a chance to profit off Minnesota’s natural resources – and in effect funding their next venture – is the opposite of standing in solidarity with communities struggling with the impacts of mining abroad. In fact, it’s endorsing their bad behavior.

We’ve already seen evidence of the mining industry’s disregard for environmental justice in Minnesota. For example, PolyMet (and the state and federal agencies that regulate it) has failed to address the concerns of the Fond du Lac Band of Lake Superior Chippewa about the impacts its proposal would have on their water quality, an omission recently highlighted in a federal hearing. If PolyMet was genuine about its regard for environmental justice, it would have addressed these concerns directly and worked to ensure its mining proposal met the Band’s standards for preserving the health of its clean water, wild rice, fish, and human health. Instead, PolyMet went to court to attempt to avoid this responsibility.

There’s no proof that mining in Minnesota would cause mines in the Congo or anywhere else to shut down. In fact, PolyMet* and Twin Metals propose outputs that would hardly make a dent in the world metals markets in which they’d be sold, decreasing the likelihood that bringing them online would result in mine closures elsewhere.

THE TRUTH OF THE MATTER

Setting all else aside, the simple fact remains: sulfide mining proposals would be a net source of greenhouse gas emissions, and there’s no guarantee the metals they would produce would go to clean energy or prevent emissions downstream. The industry business model to date has been to tell the public what they want to hear in order to push the proposal through the permitting process, then once up and running, keep costs as low as possible and sell to the highest bidder. Until backed up with hard evidence and binding commitments, industry claims about mining’s role as a responsible climate leader can be rightfully regarded as greenwashing.

We need to rise above the din of greenwashed promises from extractive industries to identify and advocate for climate solutions that actually work for Minnesotans, not just the mining industry.